The Twin Churches of the Templars and Hospitallers 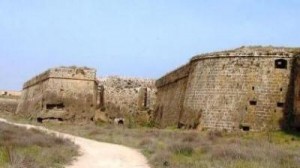 Situated on the north west corner of the city this bastion is diamond shaped and was considered by the Ottoman forces to be impregnable. It is constructed on top of solid rock and maybe for that reason the attackers never managed to tunnel underneath to lay explosive charges . Having suffered little during the ensuing years, it is still a formidable piece of construction by any standards. As with the other major bastions round the city there are long ramps up which gun carriages could be pulled by horse and moved about the city ramparts with speed. However it is beneath this bastion that the beauty of the building stands out. There is not a stone corner, angle or tunnel that has not been crafted with smooth precision.

There are two sloping entrances into the vast chamber around which the bastion is built and although it is quite obvious that the most recent army to occupy this building is the Turkish army, the volume of the chamber in conjunction with the very large gun ports is testament to the size of the Venetian cannons that were once housed here. It is not difficult to imagine the fire power that would once have erupted from this bastion and realise why it took the vastly superior numbers of the Ottoman forces ten months to conquer Famagusta.

There are two churches in the Martinengo precinct, the larger of the two is the Carmelite church dedicated to St. Mary of Carmel with some barely discernible frescoes. Nearby is the Armenian church, a small edifice that has been used as a store by the army and has most of the frescoes obliterated with whitewash, though splashes of colour are visible in a good light.