Although I have headed this article Lefkara Lace, there is a lot more to the lace industry than that made on the island of Cyprus. Just the mention of the word lace will probably conjure up a vision of something light, white, pretty and almost ethereal. Scraps of fine linen that have been so exquisitely made, that they resemble patterns of frost upon window glass on a cold winter day. There are probably several names that will come to mind as they are synonymous with lace production, Belgium, Honiton and Nottingham in the UK, Cyprus and Venice are all famous for their lace industries. 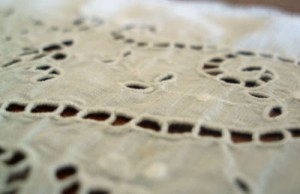 But where did it all start? It is impossible to say when or who invented it. There are various theories that the lace in Europe originated in ancient Rome and the lace in Cyprus came from Assyria. Unfortunately there is no actual proof to support these theories. However what is known is that the oldest scrap of lace in existence came from Egypt, it is held by the Victoria and Albert Museum in London and is called “the mummy lace” because it was found in an Egyptian tomb and dates from several centuries BC.

During medieval times the lace making industry developed in the countries of the Mediterranean, starting with the earliest examples that have been found of hand knotted thread, a form of macramé, to an improved technique using needles and bobbins. The lace tended to be made for ecclesiastical or court use and its production was centred in Constantinople. When the Lusignan dynasty took over the island of Cyprus, the textile and embroidery industry developed on the island. Under the relatively short period of Venetian rule, Cyprus lace found a market in Venice and was t prove so popular that a lace making initiative was started on the island of Burano in Venice. The manufacture of Bobbin lace extended throughout Europe with the development of important centres in Belgium and France. Also known as Pillow Lace, bobbin lace is a form of weaving that uses small bobbins to work a pattern that is first printed on paper and pinned to a pillow. Highly skilled workers will toss the bobbins over and under as the pattern progresses with the air of casual nonchalance that only comes with complete familiarity of their craft as the product gradually emerges.

In 15th C Belgium, Charles V decreed that lace making should be taught in all schools and convents of the Belgian Provinces. Thus, what had been a gentle pastime among the nuns became a skill that would eventually be handed down through the generations. The Belgian lace making industry is still productive employing about 1,000 workers. There are specific styles and patterns that are used on a variety of linen goods, from the corner of a simple handkerchief to the flowing veil such as was used by Princess Elizabeth of Great Britain on her wedding day in 1947. It is the Princess lace that is used for bridal veils, Christening robes and Mantillas. Renaissance lace is stronger and is used on such items of household linen that are going to get harder wear like table cloths and napkins. There is Rose point lace that is considered the most delicate and precious, and Duchess lace, that may well be worked using up to 200 bobbins in the most complicated designs. Unlike many other European countries, there are no machine lace manufacturers in Belgium!

It was the Protestant refugees who fled France and Spain in the mid 16th C who formed the early nucleus of lace makers that developed the industry in Devon and Nottingham. Lace made in Honiton, Devon definitely has the edge on that of Nottingham with continuing manufacture of handmade lace ever since. The refugees taught the local people and Honiton lace became famous throughout Europe and it is still much sought after. With the invention of the lace making machine the industry was dealt a fatal blow despite Queen Victoria ordering a Christening robe of Honiton lace that is still worn by royal babies.

As a cottage industry in the UK, lace making died out and the skill was only passed on to those who wanted to make lace as a hobby. It is a hobby that is increasingly popular and handmade lace is once again fetching a high price.

In Cyprus, the village women have made lace for centuries but it is the Lefkara lace that is best known. It is called lefkaritika and made in the village of Lefkara that is situated on the southern slopes of the Troodos Mountains in the Larnaca district. 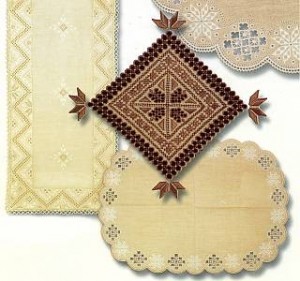 There is a legend (one of many on Cyprus which is the island of legends), that Leonardo da Vinci visited the island in 1481 and bought a lace altar cloth for the Cathedral in Milan. So much was it admired that the demand for Cyprus lace was greater than production could keep up with, hence Venice importing Cyprus skilled lace makers to teach their own people and the start of the Venetian lace making industry.

It was during the early 16th C that the development of lefkaritika emerged. Venetian nobles would spend the summer months in the cooler air of the mountains above Larnaca and the village people were able to copy the designs that had been created in Venice. While the women of the village made the lace, the men would pack it up and travel throughout Europe during the summer months selling pieces large and small to anyone who was rich enough to afford it.

The skills and designs of the medieval creators of Lefkara lace have been copied, adapted and repeated again and again as mother has passed the skill on to daughter, and thus it continues into the 21st C.

Cyprus lace is always a popular souvenir. It is available in villages both north and south of the border and will vary tremendously in price depending of the size and intricacy of the pattern. As a skill requiring nimble fingers, lace making probably has no parallel and with more and more women wanting financially rewarding jobs, the number of them making lace will dwindle unless our tourists will each buy a small piece of Cyprus history and do their bit to keep the cultural heritage of this island alive.