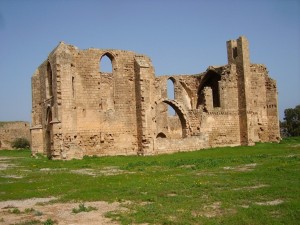 Of the two main holiday destinations in North Cyprus, Famagusta and the surrounding area come second in popularity to Kyrenia. But it was not always so. Prior to the partition of the island in 1974, Famagusta was one of the “Hot” spots for tourism. The long sandy beach that stretches southwards from the harbour all the way to Protaras and Cape Greco, was gradually, but inexorably, being developed with the construction of high-rise hotels and holiday apartment blocks.  Much of that development now lies behind the barricade that surrounds the area of Famagusta called Marash/Varosha. It is a “No Man’s Land,” a bone of contention constantly chewed over in the talks about reunification. It remains empty, forlorn, ruined. Patrolled by the Turkish Army and the UN forces it can only be viewed from a distance and cannot be visited. Propaganda that does its best to deter people from coming to the North of Cyprus makes much of the “fact” that Famagusta is a ghost town.  However, there is a lot more to Famagusta than the abandoned buildings of Varosha. 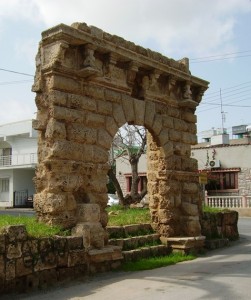 As a matter of historical fact, the walled city of Famagusta has been a Turkish city since it was conquered by the Ottoman forces in 1571 and through good times and bad it has remained so. The walled city has so much history to offer, it seeps atmosphere from every stone in its massive walls that have few rivals throughout Europe and certainly nothing compares to the bloody struggle when the Venetians fought so valiantly to hold on to their city in a siege that lasted for almost a year.

Originally walled during the Lusignan period, it was under Venetian rule that the massive defences that are visible today were constructed. The blocks of stone from which the walls and bastions are made were carved from the rock upon which the city is built. As the Venetian masons carved the building blocks, so they created the moat that is on three sides of the city. Access to the moat is only possible north and south of the harbour, either by the Djambulat bastion or the Diamante bastion. It is about two kilometres and makes a super walk especially on a spring day.

Famagusta, described by many as a huge outdoor museum should never be rushed. There is much to see and a day trip can only provide a taste of all there is. The well stocked museum of ancient artefacts in the “Chimneyed House” should not be missed. The Harbour Citadel, more commonly known as “Othello’s Tower” provides a commanding view over most of the city, there are dark tunnels into the gun ports, and the Great Hall where once the knights and their ladies dined.

There are churches to visit, many of them left as ruins after the Ottoman conquest, some little more than a few courses of masonry. However there are some that are intact and are still in use. No longer as Christian churches as some have been converted into mosques but they can still be visited. The great cathedral of St. Nicholas is now the Lala Mustafa Pasha Mosque it is in the centre of the city, opposite the remains of the huge palace that was the residence of the Lusignan kings and is well worth a visit. Though stripped of any internal evidence that it was once a catholic church, the walls are whitewashed and the stained glass windows have been replaced with plaster filigree, there is still an all pervasive air of sanctity and calm.

In the north-west corner is the Martinengo bastion, an exquisite example of military architecture and within its precinct the churches of the Armenians and the Carmelites, both are ruins but definitely worth a visit. In the former round holes can be seen in the dome that are resonance chambers to improve the acoustics, and in the latter there are traces of frescos that depict saints, including St. George. 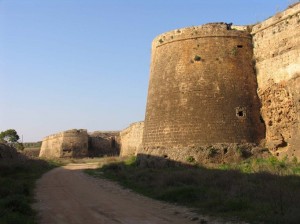 There is the ruined church of St. George of the Greeks that was once the Orthodox cathedral and close by another church dedicated to St. Nicholas, and the small Byzantine church of Ayia Zoni. There is the Sinan Pasha mosque that was originally the church of SS Peter and Paul, and there are the twin churches for the orders of the Templars and Hospitallers.

One of the curiosities of Famagusta is actually outside the city walls directly opposite the point of the Martinengo bastion, this is the underground church dedicated to Our Lady of the Golden Cave. Set in a walled enclosure, access is gained down a flight of steep steps cut into the rock that lead to a symmetrically carved doorway. The interior is obviously that of a place of worship. The apsidal end is to the east and on either side there are niches cut into the wall that would once have contained statues, fragmentary traces of fresco that depict coats of arms are all that remain of the interior decoration and there is a deep unguarded well in the floor that is the probable reason for this strange church being created hundreds of years ago. Fresh water, uncontaminated with any human or animal waste was of prime importance in a time when hygiene was minimal and infections rife. Thus an underground spring that produced pure water would be considered holy and a suitable site over which to build a site of worship.

Not far away to the north lies the City of Salamis, undoubtedly the largest and most important Roman city site on the whole of the island. Excavations during each summer continue to reveal more of this fascinating city and time is needed to explore it in full. It is easy to see the main part of the complex that covers the theatre, amphitheatre, bath houses and gymnasium. But a good walk is necessary to seek out the other parts, the enormous cistern that stored the water for the public fountains, private houses and the baths; the basilica of St. Epiphanios, the agora and the temple of Zeus; the villas and the Kampanopetra basilica close to the shore.

A kilometre to the west of Salamis is the church of St. Barnabas, patron saint of Cyprus. This church built close to the site of the saint’s tomb is now an icon and archaeological museum. It remains one of the most holy sites on the island and is a place of pilgrimage for all Cypriots. 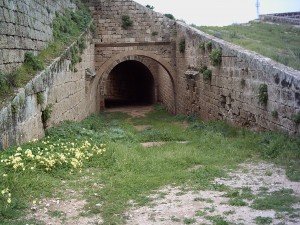 With so many attractions in the area and some beautiful beaches, it is easy to see why the Famagusta region was once so popular. Now there is no good reason why it should not be so again. I would not hesitate to recommend the Palm Beach Hotel in Famagusta as my first choice of hotel, it has an enviable position on the northern edge of Varosha, a beautiful beach lapped by crystal clear water and because of the “ghost town” to the south it is extremely quiet. However as I write this in March 2010 the Palm Beach is undergoing extensive remodelling and is some months from completion. So it is necessary to move north of Salamis to find good accommodation and a base for exploration. The high-rise Salamis Bay hotel is a cosmopolitan hotel with something for everyone. It was built prior to partition in 1974 and is the only true high-rise hotel along this coastline. Going further north, the town of Bogaz has two hotels I can recommend, the Exotic and the Majestic. Both of these hotels have very well appointed rooms and an excellent menu. The Exotic has a fresh water pool and fun-slides, on the opposite side of the road there is access to the sea from a purpose built jetty. The Majestic has two fresh water pools and a small private beach.

Bogaz is an excellent base from which to explore the mountain castle of Kantara and the nearby villages, including the Eco-village of Buyukkonuk.