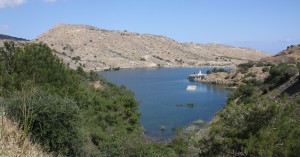 The areas around Guzelyurt/Morphou and Lefke/Lefka have for many years been known as the fruit basket of Cyprus, and it is a predominantly agricultural area. This great, green fertile expanse of land produces an abundance of citrus in all its many varieties; as well as soft fruits such as peaches and nectarines, apricots, strawberries, melons and dates, there are nuts; walnuts, almonds and pecans, and vegetables; peas, green beans, aubergines, okra, peppers, tomatoes, cucumbers, and of course potatoes for which Cyprus is famous. All these crops are irrigated by the mineral rich waters from the springs that rise in the Troodos Mountains.

This is also a historically rich part of Cyprus with the ancient Bronze Age town of Toumba Tou Skourou, the 6th C BC city of Soli and the hilltop palace of Vouni providing an insight into the cultural heritage up to the Byzantine era.

Toumba Tou Skourou is to be found in the midst of a citrus grove on the northern outskirts of Guzelyurt and it is not an easy search. There is a sign on the roadside and a rough track, with a walk through the grove before the site is reached. There is evidence of stone and mud brick houses, and tombs. The artefacts from this site are on display in the Guzelyurt Archaeological Museum. 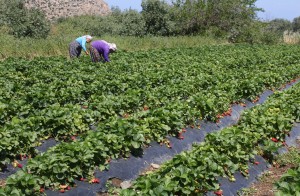 The Orthodox Metropolitan building is now used as the Guzelyurt Museum and it is central to the town, therefore easy to find. Laid out in chronological order throughout a series of rooms on the first floor, are artefacts that have been discovered in the area. Recent finds, including the exquisite gold jewellery that was discovered behind the theatre at Soli are on display in the new exhibition halls. In addition to the Archaeological museum there is on the ground floor a Museum of Natural History, containing a somewhat bizarre collection of stuffed birds, mammals, reptiles and marine creatures.

Immediately adjacent to the museum is the Church of St. Mamas, built in the 18th C on the site of an earlier Byzantine church, this is just one of many on the island dedicated to St. Mamas, the patron saint of tax avoiders! According to legend, (and there are many with varying dates so I tell the one I like best,) Mamas was a young poor man, who lived in a cave during the late Roman/early Byzantine period. He had no income apart from the charitable gifts he received in return for his prayers, thus he had no money to pay his taxes. After many demands, he was arrested for non payment and was brought into the town to face the courts. On the way he saw a small lamb being attacked by a lion. Without fear he gathered the lamb into his arms, jumped onto the lions back, and rode on to face his punishment. The judge was so impressed by the young man’s ability to control a wild beast that he said, “Truly you must be a holy man, therefore no more taxes.” That is why Mamas is the patron saint of tax avoiders. Not evaders, because that is illegal!

The church is now open to the public as an icon museum and is very much as it was left in 1974. There are still the priests’ vestments, the sacramental vessels and wedding crowns. The chandelier that hangs in the centre of the nave is without equal and the church is worth a visit for that alone.

There is an open market every Saturday, which is very popular with locals and visitors, with stalls selling produce from the region, and in June there is the big Orange Festival. 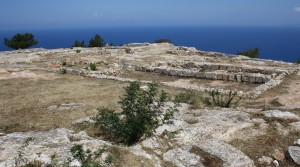 West of Guzelyurt is the town of Lefke/Lefka now known more for its university than anything else, but once the centre of the copper mining industry. Few relics remain of the past, though the opencast mine workings can still be found in the hills above the town, where the huge pits are gradually being used for landfill. There is an area close to the town cemetery that has been dammed and flooded with a capacity of 4 million tons of water to provide plentiful irrigation for the many crops that are grown in the area. Now lying beneath the waters are the lower workings of the mines including the offices, all the tunnels that went deep into the mountain side and there is a strange circular building partially visible where ore samples were graded. Small narrow gauge trains were used to transport the ore from inside the mountain and then loaded onto larger rolling stock to be taken to the separation tanks at Gemikonagi/Xeros. Of these engines only one remains. Now badly damaged by vandals and covered in graffiti it is to be found at the Ataturk children’s play area on the approach to the town.

It is said that the Romans first worked the mines in the Lefke area but it was not until 1911 that an American called C. Godfrey Gunther revived the industry and developed it under the name of Cyprus Mines Corporation. The town became prosperous and there was great benefit to all the locals who were employed by the CMC. There are still terraces of miners’ houses, though the population has much dwindled since partition in 1974 when the mines north of the demarcation line were closed. Now there are but traces of the prosperity that was once evident in the number of hotels, cinemas, restaurants etc.

Lefke has always been an extremely rich agricultural area, blessed as it is with a good supply of water from the mountains it grows an amazing variety of crops, including succulent walnuts, and pecans. The valley that runs beside the town is a dense forest of palms that yield the best dates on Cyprus.

Architecturally the town reflects the many and varied periods of occupation. It was once a rich barony in medieval times, becoming predominantly Turkish after the Ottoman conquest, the size and quality of the buildings reflects this. There is also evidence of the British Colonial incumbency with a large water tank in the town centre that bears the royal coat of arms. It was erected to commemorate the coronation of King George IV. 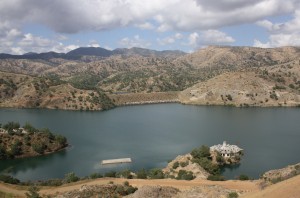 In July Lefke is the venue for the annual Walnut Festival.

Continuing westwards along the coast road, the ancient sites of Soli and Vouni are well signposted. The Soli basilica does now have the advantage of wooden walkways set above the mosaic floor that enable a better view of the intricate tesserae. However nothing alters the fact that there is insufficient lighting beneath the gantry roof and the mosaics are not kept clean. The cliff-top palace site of Vouni provides a panoramic view over Guzelyurt Bay to the north and the Troodos Mountains to the south, even on a hot day there is a gentle breeze and larks can be heard singing in the skies above.

The road twists and turns as it undulates through the foothills of the mountains on the way to Yesilirmak. This village is as far west as one can go before getting to the border. However there have been talks between the two Presidents of the separate halves of this island that have come close to agreeing the opening of another crossing point that will grant easier access to both sides. This proposal may now change as a new President of the TRNC has (in mid-April 2010) been elected and the resumption of the peace talks has yet to take place.

Yesilirmak is one of the principle strawberry growing areas and during the season the air is scented with the soft aroma of ripe fruit. They can be bought on the road side and there is nothing quite like a perfectly ripe, sun-warmed strawberry picked straight off the plant for flavour. 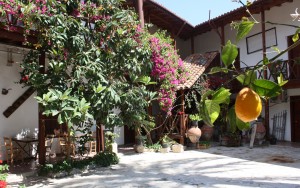 Accommodation in the area is sparse but I am happy to recommend the Lefke Gardens Hotel, this is a restored Ottoman house set round a central courtyard. All rooms are air-conditioned and there is a small pool. Room rates are currently (April 2010) 45 Euros per night B&B for two people. Email lefkegardens@superonline.com