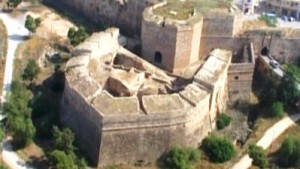 The Land Gate and Ravelin | Famagusta

The land gate is probably as old a building within the city as the citadel, though the current bridge and gateway entrance are relatively modern. The road now passes through one of the gun chambers that flanked the ravelin. During the Ottoman siege fierce fighting took place around this bastion as the opposing forces grew more and more desperate to take the city. They did succeed in gaining access at one point which caused the Venetians to take desperate measure of detonating the enormous supply of gunpowder that was contained within it. The resulting loss of life to the Ottomans was so severe that it was recorded in a painting, copies of which can be bought in postcard form.