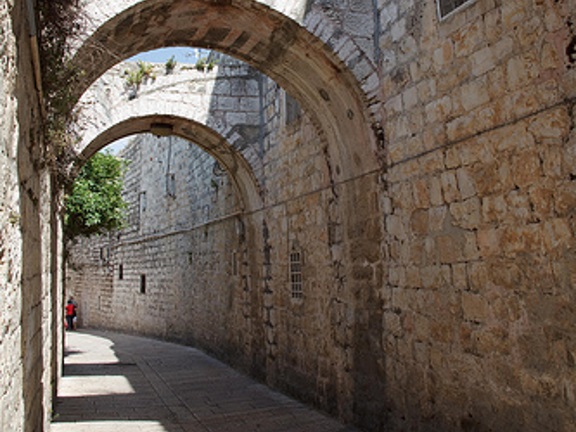 From the Dervish Pasha Konak, turn right from the front door and you will be in the thoroughfare that was once called Victoria Street (Salahi Sevket Sokak). This was the main road through the predominantly Armenian quarter until 1964, when the city was divided. At the end of the street is a barrier that closes off the access to Paphos Street and the spire of the Catholic church of the Holy Cross can be seen on the other side. Most of the houses and business premises that were inhabited by the Armenians were abandoned and remained empty. Gradually they fell into a state of total dereliction and some are indeed ruined beyond repair. However with the aid of the UN funding, not all the buildings are lost forever. The restoration project is ongoing and will continue for many years to come. Already finished is the complete rebuilding of the Armenian theatre in which dramatic performances are held regularly and on certain days the cafe/bar is open to the public. There are many narrow streets in the area that have had their facades renewed and vehicular traffic is prohibited to protect the buildings.

From Victoria Street, it is a short walk onto the walls of the city and the trees in the Roccas bastion park, provide shade and a pleasant place to sit. From the park, the Paphos gate is clearly visible, as is the street that leads to the Ledra Palace Hotel, (The UN headquarters) and the Ledra Palace crossing point. Tanzimat Street follows the top of the walls heading northwards passing the Presidential Palace and returning to the Kyrenia Gate.