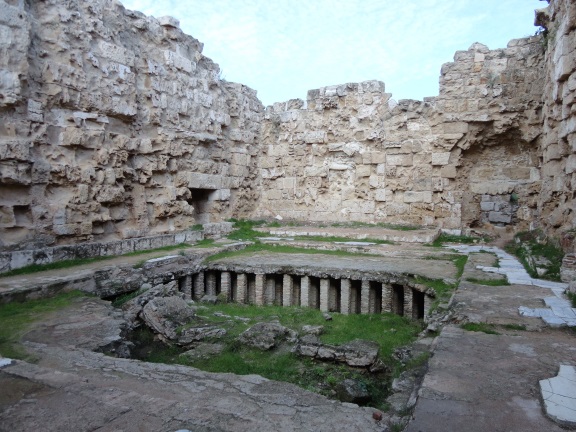 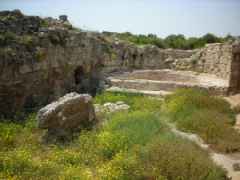 Adjacent to the ticket office, the bath houses are the most visited part of the site. There is the central gymnasium or exercise ground that is surrounded by marble columns. These columns were not originally part of the gymnasium and most probably came from a temple or the theatre stage area. The original limestone columns were toppled and broken during one of the many earthquakes that damaged the city. In one corner of the columned stoa there is a latrine that was able to seat 44 persons. Communal public conveniences may seem odd to us in the 21st C but the ancient Romans knew no such prudery and to them it was a good place to have a gossip.

The bath houses follow the usual design that consists of hot and cold pools, sweating room, and dressing room. There is one piece of gradually fading fresco in the roof of the doorway into the sweating room, and fragmentary mosaics in the arches of the adjoining rooms and furnace areas. There is ample evidence that these bath houses suffered severe earthquake damage and were rebuilt.

Set around one of the cold pools is a collection of headless statues that were found on the site during excavations in the 1950’s.