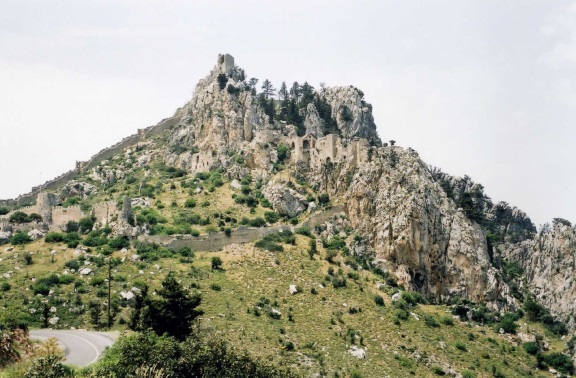 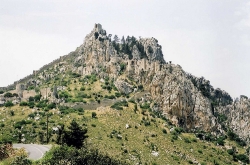 Clearly signposted from Kyrenia, this is a castle built on three distinct levels, each one designed to be self-sufficient and self-contained. Although it was not exempt from the ravages of war, and was besieged during the 13th C when an attempt was made to overthrow the French dynasty, the island was at peace for many years and the castle was used as a summer palace. From the belvedere on the second level, with a breeze stirring their silken headdresses, the ladies of the court could watch the knights as they jousted on the tournament field below them.

The Castle gets its present name from a reclusive hermit who once dwelt among the crags. Originally it was called Didymus, meaning twin, because of the twin peaks on which it is built. The French managed to corrupt this name into Dieu d’Amour, possibly due to Aphrodite the Goddess of love being associated with Cyprus.

Entering the lower ward from the Barbican through an arched Byzantine doorway the path continues to the left passing the restored gatehouse; the parapet walkway along the walls, and large underground cisterns. Then on the right is an old stable block that now contains pictures and tableaux of castle life as it was in the middle ages. The middle ward is accessed through an imposing gateway that was once three stories high. There are steps from the tunnel entrance up to the level of the first floor which makes a good photographic point for the lower level. Another flight of steps leads up to the Byzantine church. It is roofless, but with some restoration work to the pillars and partial dome dating from the late sixties. There is little else to see apart from the sacristy and confessional on the north side of the nave, and small private chapel built behind the apse on the south side.

Descend from the church into the tunnel that leads to the great hall and belvedere and from there explore all the remaining rooms on this level. There are kitchens, latrines, barrack rooms, storehouses and royal apartments to search for and having worked up a thirst, the great hall has a café so refreshments are available.

There are steps all the way to the very top, passing on the right the very large cistern that stored water for the middle ward. The ascent is steep but a good handrail is provided and the top is soon reached.

A junction in the path leads left and right. Left goes to Prince John’s tower. It was from the window at the far end that Prince John, the co-regent of Cyprus during the minority of Peter II, defenestrated his Bulgarian bodyguards one by one! He thought they had betrayed him and punished them before finding out the truth. Only one survived to tell the tale.

Turn to the right and enter the gate into the top most ward. Here are more kitchens, the topmost tower up an narrow flight of steps, and the royal apartments. The majority of chambers are in ruins but it is possible to sit in the window embrasure of what is always called Queen Eleanor’s boudoir and gaze across to the mountainside village of Karaman and far out over the coastline as it snakes sinuously westwards into the far distance.