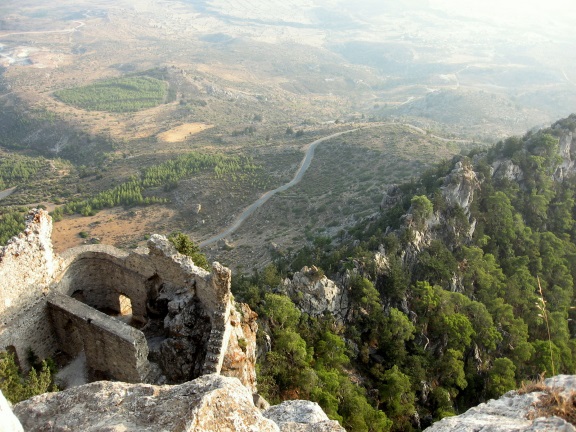 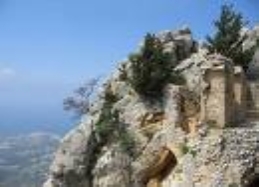 As the name implies, this castle is buffeted by the winds, and standing at 3,100 feet it is the highest and most inaccessible of the three castles. To get there, take the turning that is signposted at the top of the Five Finger mountain pass and follow the route for a little over four miles. All along this approach road there are magnificent views over the Mesaoria plain and the City of Lefkosa (Nicosia). Goats will be seen browsing among the bushes and somewhere a sleepy goatherd will be having a nap under a tree.

For most of the way, the castle will be visible, but tantalisingly for quite a while it never seems to get any closer. As the route twists and turns round a rocky bluff, the castle will disappear and then suddenly it is in view again. There is a slight turn to the right that accesses the car park where there is a solitary olive tree and a memorial to the crew of an aircraft that perished in a mountaintop crash in 1988. This is where you leave the car and start to walk.

There are gently graded concrete steps, interspersed with low walls upon which to rest from the arduous climb. There are always wonderful views in every direction to have a chance to pause and get ones breath back or seek out the flowers that grow on the hillside. As with the other two castles the terrain is rich in flora, and the best time to see it is the Spring.

The castle is built on two levels or wards and the main gate is more or less intact and gives the first cool welcome shade. It is on the lower level that the most complete rooms are available for viewing and there is evidence of human habitation in the quarters that were used by the custodian, when there was one long ago. Now only put into service again when there are workmen at the castle repairing the fabric of the buildings.

In some of the rooms there is evidence of cisterns beneath the floors and some still contain water. The rains that fell during winter were the only supply of water for drinking and cooking and it was stored in deep underground reservoirs were it stayed fresh for many years.

Having visited all the chambers of the lower ward, it is necessary to climb another 75 feet to attain the upper level. The steps built into the rock face are very narrow and this is not an ascent recommended for anyone suffering with vertigo. There is a final short flight of a dozen steps leading into a barrel vaulted room that is the only completely waterproof room on the upper level. From this there is a passage with ruined rooms on both sides and a splendid view at the far end. Return to the entrance and then climb to where the lightning conductor marks the highest point. Although for some the prospect of climbing to the top is too much, for those who do not have a fear of heights, it is well worth that extra effort. Look down at the roofless buildings of the lower ward in a south westerly direction and you will see peeping round a fold in the mountains, the corner of the huge flag of the TRNC that is painted on the hillside.

Just to stand at 3,100ft and feel the wind blowing off the sea; to watch mares-tail clouds drifting lazily across the sky; to turn 360 degrees and gaze at the spectacular panorama, and if you are lucky to hear the call of buzzards and ravens in flight as they circle the castle top, will make the climb totally rewarding.