If it were not for the desolate divide that bisects this city into almost equal halves, there would be little to differentiate between the two sectors. There are mosques, churches and museums. There are old houses, some in ruins as they await the renovations that are being carried out on both sides of the border, dusty streets, souvenir shops and welcoming cafes. There is evidence of more prosperity in the south, but this is all part of the Capital city in which Cypriots live, and where they work, just as they do in the north.

What follows, is a walk through the southern part of Nicosia and will be an almost mirror image of the one through the north. The itinerary is written with a view to visitors crossing from north Cyprus into south Cyprus. However the walk can be followed by anyone staying in the south, as starting and stopping points are easily varied. 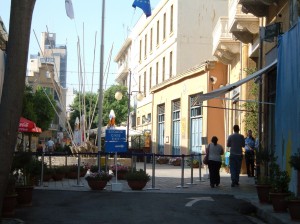 The easiest way to access the southern part of the walled city from the north is via the Lokmaci border crossing point in the centre of Nicosia. Using this route will necessitate carrying your passport, filling in a visa slip which will be stamped with the date of crossing, as it is when entering or leaving the TRNC via Ercan airport. It is a simple procedure and takes only a matter of minutes. You will cross into Ledra Street which is the main thoroughfare of the pedestrian precinct in the south of the walled city.

Turn right and follow the “Green Line” through to the Paphos Gate. This is the smallest of the three main entrance gates into the city and was originally known as the “Porta di San Domenico” after the medieval monastery of St. Dominic that was situated near by and became a victim of the demolition work carried out by the Venetians when they reduced the outer perimeter and remodelled the city. As with the Kyrenia Gate, the walls were breached during British rule to create a larger entrance for traffic.

The Maronite Church and the Catholic Church of the Holy Cross are both close to the Paphos Gate. From this point turn south and follow the walls as they lead back to the pedestrian area where there is a wealth of culture to explore. The suggested route that follows can be easily altered with the use of a map, though all the places listed are well worth a visit, even if it is only a brief one.

First on the list for a visit should be the Leventis Museum, located in a restored building within the pedestrian area off Ledra Street, portrays life in the capital from ancient times up to the present day. There are collections of maps, medals, coins, postcards, items of folk art and traditional clothing.

Ayios Savvas, stands on the site of an earlier church from the Lusignan period. Major renovations were made in 1608 and 1781, with the south aisle being added towards the end of the 19th C. Evidence for the dating of various works can be found carved into the masonry and the iconostasis bears the date 1801. The interior is richly decorated with painted walls and pillars and adorned with beautiful crystal chandeliers. 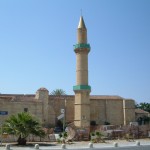 Omerye  Mosque, towards the end of the 14th C the monastery of St. Mary of the Augustinians was one of the three most important monasteries in the city. Construction dates from early 14th C with a large and small cloister. East of the nave is a renaissance style building which was a hospice for pilgrims. Converted to a mosque after the Ottoman conquest, the building was renamed after Omar a relative of the prophet Mohammed.

Omeriye Bath house this Turkish bath is from the late 16th C and is to be found north of the Omeriye Mosque. It was built as a gift to the city by the Ottoman commander Lala Mustafa Pasha. The restoration process has included structural repairs to the internal and external walls, as well as replacing the paving stones and fittings, and the old steam system.

Cathedral of St. John this church was constructed in the 17th C on the site of a former Benedictine abbey. When the order of Benedictines left the island after the Mameluke raids the monastery passed to the Orthodox Church. In 1720 it was renovated and consecrated as an Orthodox Cathedral. The exterior is simple and unadorned but the single aisle interior with it barrel-vaulted roof is covered in richly coloured frescoes inspired by tales from the Bible. On the south wall there is a painting of the discovery of the tomb of St. Barnabas and the iconostasis is lavishly decorated with gold leaf.

Immediately adjacent to St. John is the Archbishops’ Palace and the Byzantine Museum. Built in 1960 as the residence of the first President of the newly formed Republic of Cyprus, Archbishop Makarios III, this building with neo-classical and Byzantine style elements is not open to the public. However the building that is attached to it contains a superb collection of Icons from the 9th – 19th C, that come from churches all over the island and is the Byzantine Museum and Art Gallery. There are also examples of wall paintings from 10th – 18th C and sacred vessels used during the sacraments, vestments and books. The art gallery is laid out in chronological order following the periods of early Byzantine (4th – mid 7th C), the intervening period of the Arab raids, through to the Venetian period (1489-1571) and Ottoman rule which ended in1878. 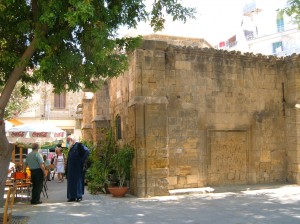 Folk Art Museum formerly the Archbishops’ residence, this is an imposing building with arched facade and a large veranda on the first floor. There is an external stone staircase leading to the veranda. During the Ottoman period a room in the upper floor was used as a Greek school. Today the building is an Ethnographical museum exhibiting clothing, embroidery, carved and painted furniture and ethnic tools.

Hadjigeorgakis Kornesios Mansion the house as we see it today is a unique example of 18th C urban design for the courtyard houses of the city. Built originally in the 16th C for the prominent Venetian family of Podocataro, it was later owned during the Ottoman period by dragoman Hadjigeorgakis who renovated and added to the structure in 1793. Now it is a museum housing many of his possessions. Its proportions, many rooms and central courtyard give a good impression of how a wealthy family lived during the Ottoman period.

Ayios Antonios, single aisled and like St. John constructed without a dome, this 17th C church has three arched entrances and a tall bell tower. It was restored during the 18th C and there is evidence of stone from an earlier building being used in its construction.

Chrysaliniotissa (Our Lady of the Golden Flax) built in 1735 on the site of an earlier church from the mid 15th C this is considered one of the finest examples of Byzantine style architecture. The church is famous for its collection of icons, many of which are reputed to have come from St. Nicholas Church (Bedestan).

Chrysaliniotissa Gardens this is the counterpoint to the Roccas Bastion in the north of the city and provides a cool shady area in which to sit while children enjoy the playground.

Ayios Kassianos possibly built on the site of an older church from the Lusignan period that was destroyed during the Ottoman conquest, this two aisled church was constructed in 1854 using stone from its predecessor. The church has a remarkable collection of icons said to have been transferred from St. Nicholas, (as with Chrysaliniotissa). This church is unique in Cyprus as it is the only one dedicated to St. Kassianos whose feast day is 29th February, thus it is celebrated every fourth year! 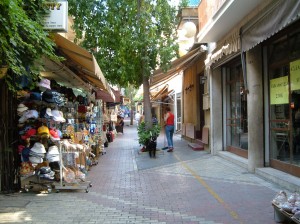 Tahtakale Mosque this is an historic piece of Ottoman architecture, it is a rectangular mosque with internal parallel arches and timber framed. The structural support and facades of the building have been restored.

Church of Stavros tou Missirikou (Arablar Mosque) this is a three aisled, rectangular shaped church with semi-circular internal apse that has five sides externally. It is a curiosity that dates back to the medieval period and blends Byzantine, Gothic and Renaissance elements. Under the Ottomans it was converted into a mosque and three of its doors were closed up. It was renamed Arablar Djami, which means Mosque of the Arabs.

Phaneromani Church built in 1872-73 this church was dedicated to the Panayia Phaneromani. Historical documents record that there was a convent here in the 14th C. A new bell tower was erected in 1938 and fitted with bells that came from a foundry in England in 1940. The iconostasis dates from 1659, in which there is a 1924 copy of an icon after which the church is named. The original was transferred to the Byzantine museum. There are other icons of merit in the church, notably in the pulpit and of Christ Pantocrator and the four Evangelists in the dome.

Having returned to this point, there are plenty of refreshment stops in which to relax before returning to the border crossing.