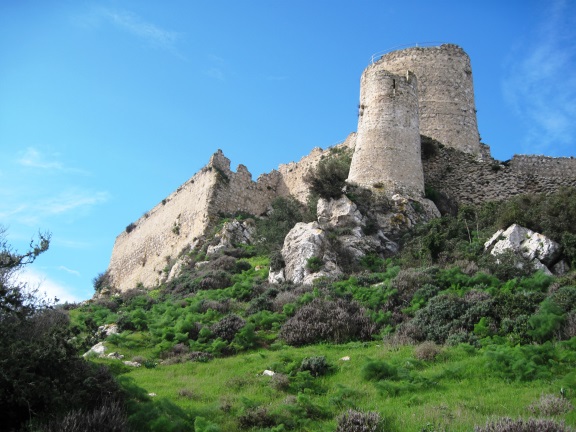 There are many different routes to his castle, all of them involve easy, if slow, drives up the mountain roads to the village of Kantara and from there follow the signs.

The documented history of Kantara coincides with that of Hilarion and Buffavento, and it saw its share of military action, especially when the Genoese attempted to take the island in 1372 and the forces of James I King Of Cyprus, proved adamant in defence. The castle situated as it is, had a birds eye view along the Karpaz peninsula, and an unequalled vantage point over the opposing forces who had taken the city of Famagusta.

In common with the other two castles it was deemed of no further military use by the Venetians when they came to power and partially dismantled. Apart from the necessary restorations that have been carried out in order to render the stonework safe, it is very much as it was several hundred years ago.

At a little over 2,000ft above sea level, Kantara is the lowest of the three castles and it is constructed all the way round the last formidable crest of the mountain range. Scaling to the highest point is not too strenuous a climb. From car park to gate house takes only a few minutes.

A gravel path winds upwards and passes a cistern on the right and it is usual to feel a conflicting cool breeze swirling off the sea, and from the plain, and hear it as it sighs through the stunted pines. The gate house that once was protected by a portcullis has a guard house to the right, while the path continues up some very steep and well worn slippery steps into the barbican of the lower ward. The north east and south east towers are very evident from this point with a further short climb to the doorway that leads into the upper ward. It is at this level that Kantara reveals its completeness.

Although the upper floors were removed hundreds of years ago, there are still the lower rooms of the guard house, Castellan’s apartments, barrack rooms and on the western side of the castle there are vast storerooms and deep cisterns.

Following the line of the perimeter walls will reveal scant remains of further dwellings and there are breathtaking views at every turn. Not to be missed is the north east tower, that contains a long room, equipped with tall arrow slits that permitted archers armed with longbows to fire on the enemy below and yet remain relatively protected themselves.

A walk around Kantara should not be hurried for this is the castle of a hundred and one rooms, and according to legend anyone who finds the 101st will enter Paradise!

Warning: All of the castles have unprotected drops and open cisterns, care should be taken at all times especially with children.