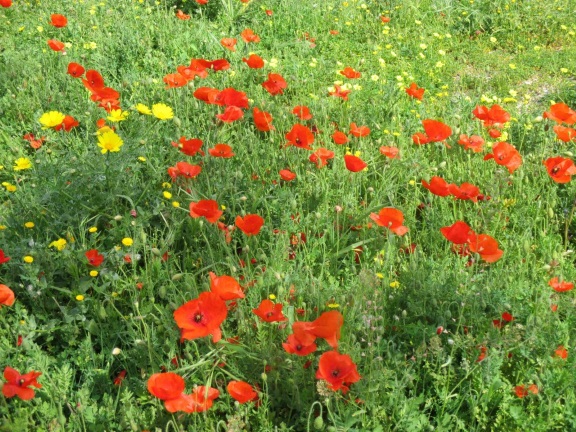 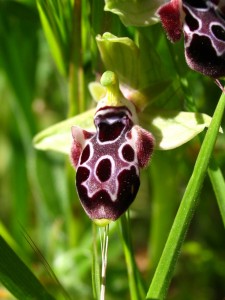 This picturesque site dating from the Bronze Age (C1600 – 1050 BC) is to be found on the right side of the road between Camlibel and Yilmazkoy. Set back about 100 metres from the main road, the site is surrounded by tall Cypress trees.

Excavations were carried out in the 1950’s and have revealed many small rooms, deep wells, a grain milling area and a central courtyard with a Cretan-Minoan altar. The altar is not original but has been reproduced in a style contemporary with the time in which pagan worship centred round the Horned God. Oblations to the God would have been made at this altar with gifts of fruit, flowers, cereals, or the sacrifice of an animal, depending on the season and what was required from the God. He was principally a God of fertility, without which the world as we know it will cease to be, and the High Priest and his acolytes would offer up prayers and the accompanying gift or sacrifice on behalf of the supplicant. It is not difficult to imagine a moonlit night, with a dark blue sky dotted by a myriad stars, and a religious ceremony of great importance taking place within the confines of this sanctuary. Carrying the imagination a little further it is just as easy to visualize, the transition from one belief to another, as one cult gained precedence until this pagan site fell into disuse with the coming of Christianity. Even today it has a gentle biblical feel about it as a shepherd mounted on a donkey, quietly tends his flock while they graze. Stop and listen, it is as if time stands still.

The best time to visit this site is in Spring when it is bedecked with wildflowers and many varieties of Bee Orchid. 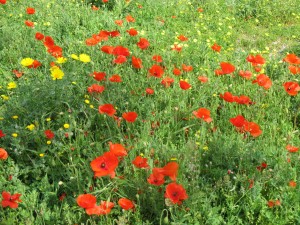 If approaching the site from Camlibel, the church of St. Panteleimon will be seen behind a barbed wire fence on the right. Panteleimon is one of the many saints associated with the medical profession. He was born in Nicomedia to a pagan father and Christian mother though he followed the pagan belief while studying medicine. He became the favourite physician of the Roman Emperor Galerius Maximianus (260 – 311 AD), and during his residency at the heathen court Panteleimon converted to Christianity and was beheaded for his new faith in 303 AD.  This church was once the seat of the Bishop of Kyrenia, and was abandoned in the 1950’s because there were just too many churches to maintain. It soon became derelict and is now in a very sorry state of repair. It does lie within the confines of an army camp and is not open to the public.