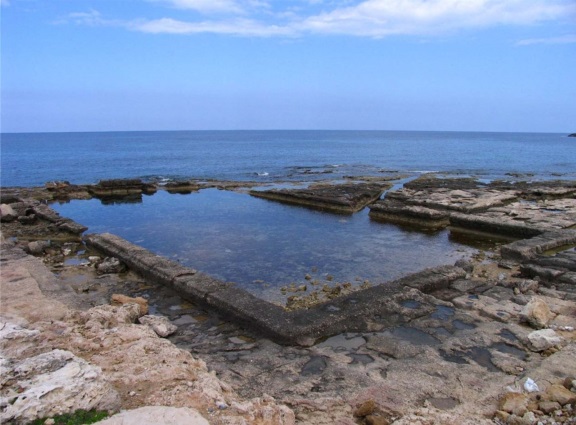 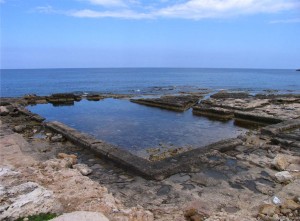 Continuing westwards from Kyrenia, pass the turning to the left signposted Alsancak, soon on the right there is a sign for the Mare Monte Hotel. At present this hotel is closed and undergoing restoration, however the drive to the hotel is the best route to take in order to access the Lambousa fish tanks. Once the entrance to the hotel is reached turn left, then drive or walk the rough track that leads to the sea. The fish tanks are built out of the rock and were used during the Roman and Byzantine period to keep the fish catch, that were surplus to immediate use, fresh for another day. It is hard to believe that the tanks are as old as they are because the cut stone is still square edged and symmetrical. To be clearly seen are the inlet and outlet sluices that kept the water oxygenated and fresh, permitting the fish that were being kept to live healthily until required for cooking.

Landward of the fish tanks are some of the Lambousa tombs cut into the rocks. In later years this tomb area became a quarry but there are still many burial niches to be seen, though some are more difficult to access than others. The site tends to become overgrown in springtime and almost disappears among the wild flowers.

The remainder of the Ancient site is easier to access by returning to the main road turning westwards again and then taking the next turning that is signposted, Lambousa. This area contains the Monastery of Akhiropietos but due to the fact that it is in the hands of the Turkish Army, it is not open to the public. However the nearby beach that was once the ancient harbour is accessible and remains of the old harbour walls can still be seen. This is a very popular beach in summer and there is a cafe and bar.

Standing close to the shore, visible, but usually firmly locked, is the church of St. Evlalios. This church has been closed for many years, and in fact it was deserted and unused long before partition. However the site on which it stands is worth a visit because clearly visible to the north east of the building is a large area of opus sectile flooring from a much earlier basilica.

Also visible but not to be visited is the strange square of limestone that was left as a detached block when the quarrying finished. This hollow piece of stone is called the Chapel of St. Evlambios. It is a curious object with walls that are three feet thick and the interior contains tomb-like niches. There is a slight apse carved into the rock but no other architectural features.