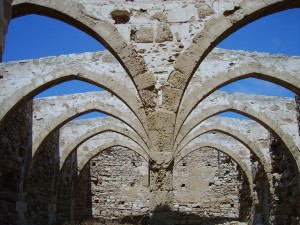 Like sentinels along the Cyprus shore, stand the slowly crumbling relics of a wealthy past. These are the remnants of an ancient trade that once helped make Cyprus very rich. Dotted along the coastline, now abandoned and neglected, stand carob warehouses that are inexorably crumbling into a state of ruin that will soon be beyond repair. These warehouses, built wherever there was a convenient natural harbour, were used to store the carob harvest before it was packed and exported into Europe.

Few first time visitors realise that most of the cafes, bars and restaurants that line the old harbour in Kyrenia, were once stores for the simple commodity that helped to produce such abundant wealth that it was called Cyprus Black Gold. The warehouses have been modernised to such an extent that they barely resemble their counterparts along the coastline and Cyprus is lucky that these have been preserved. A walk through the narrow streets behind the harbour will reveal the doorways through which the carob was deposited after being brought in from the outlying fields and mountain plantations by a pannier laden donkey. Once prepared for shipment the carob would be packed into hessian sacks and loaded onto the ships waiting in the harbour.

The carob tree (Ceratonia siliqua) produces clusters of long pods, which in the stage of early growth resemble large flat broad beans. During the ripening process these gradually turn to a rich dark brown, and before the pod dries out in the summer heat the carob crop is harvested for animal feed.

For many hundreds of years the carob harvest was exported to all countries of Europe where it was fed to cattle, sheep and horses. Sometimes broken up and mixed with straight cereals or ground finely, then mixed with a pulverised selection of oats and barley and turned into cattle cake. Until the late 1960’s carob continued to be exported as a cash crop providing much revenue to the exchequer of Cyprus.

However, by this time the warehouses built along the coastline had already fallen into disuse and the larger commercial premises built nearer the major ports were used for storage. At that time, no one thought to preserve the fabric of the buildings that had once held the “Cyprus Black Gold”. 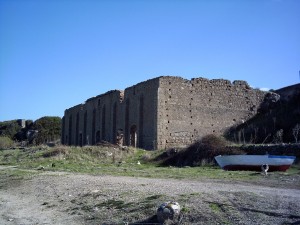 Seeking out some of the old ruins is an exploration with picturesque results. It is all too easy to drive the coast road and just keep going to the point of destination. But what is the hurry? Take some time, stop at a scenic vantage point and look at the surrounding countryside. There are several of these wonderful buildings to be found at intervals along the coast, east or west of Kyrenia. Some are easily spotted and others are hidden by a fold of cliff and not immediately visible. Most are set on a rocky promontory that is moulded around a small harbour. Sometimes there are the remains of a jetty slowly eroding in the relentless tide. There are those that are squat, single storey buildings, while others resemble great Cathedrals with lofty chambers and supporting arches made of finely carved stone. Sometimes tapering trunks from some ancient giant pine trees support what is left of the roof and standing inside these structures it is hard to imagine that these enormous buildings of such awe inspiring proportions were built as simple storehouses. There are now very few with roofs intact, and those that have, still provide a dry haven used by a shepherd to keep his flocks safe at night or a fisherman will make good use of it as a winter boathouse.

West of Kyrenia, just beyond the village of Kayalar, a warehouse close to the sea makes an ideal picnic spot on a hot summer day. Close by is a small restored Orthodox chapel and there is safe swimming off the rocky beach.

East of Kyrenia, below the village of Esentepe is a most imposing warehouse consisting of several rooms and built right on the water’s edge. There is easy access from the new road. Continuing along the road eastwards, another is to be found on the shore at Tatlisu. At the crossroads, turn left off the new road, drive to the bottom of the road and walk down to the shore. To the right will be seen a warehouse set under the cliff, and it is well worth the short detour.

For those travelling into the Karpaz, there is an exquisite example set on the coast below Yenierenkoy. Nearby are the abandoned buildings of another long defunct industry. These are the smokehouses in which tobacco was once cured, and they too stand as reminders of an industry long gone. Even though tobacco is again being grown in the Karpaz region it is unlikely to ever be the prolific crop it was during the 1960s. 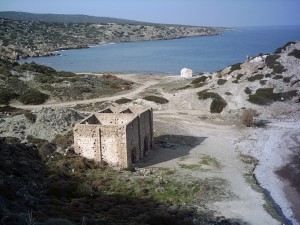 The carob warehouses have stood against the varied mood of nature for hundreds of years. During their useful period they have been repaired, their walls have been kept firm and solid, and their roofs have been maintained against the rain. But now the purpose for which they were built has gone, so abandoned and forlorn they stand to face the wind and tides through successive years with no-one to care if they stand or fall, their tumbling masonry gradually robbed for recycling.

Anyone who appreciates the history of Cyprus and all its many facets should go and find these buildings now. Explore them and preserve them in archives of photographs, because when they have disappeared and no longer grace the Cyprus shore it will be too late to mourn their passing.

The local farmers still gather in the carob crop every summer and it is used to feed their cattle, sheep and goats. It is a feed substance that is highly nutritious and full of sugar, so in addition to being used for animal fodder it has other domestic uses. Carob syrup can be found in most health food stores and the Cypriots make their own version called pekmez this is produced by grinding the black pods into powder and then boiling it until a dark molasses like liquid is produced. It can be used in soups and stews, poured over ice cream or mixed with yoghurt it is especially delicious, and the Cypriots believe that a teaspoon full every day will keep colds and flu away!