Weather and Climate in North Cyprus

About 3 miles (4km) west of Kyrenia, and set high it the upper reaches of the mountain slopes looking down over Karaoglanoglu, is the picture-postcard-pretty village of Karaman.

To drive to the village, take the road west from Kyrenia and then the signposted road left out of Karaoglanoglu and keep climbing upwards through Edremit where the road is very narrow. Here you will find a good souvenir shop in the centre and parking near the disused church. Continue on until a sign is seen to the left pointing the way to the Bronze Age cemetery. Dating from the Middle Bronze age and predating the Royal Tombs at Salamis, there is a collection of tombs in which some fascinating artefacts were found. Among them a Minoan style cup made of Kamares ware and some blue glass beads. In tomb 6 a small statue of a female figure, thought to be a fertility goddess was found and it is the earliest human figure found on Cyprus to date.

On leaving the cemetery, continue on up the hill to reach Karaman, called Karmi pre-partition and notable for being the last village to have the post delivered by donkey, a service that ended in 1959. This was predominantly an EOKA stronghold, and when it was abandoned in 1974, it deteriorated into a collection of tumbledown ruins.

Because the village has such a picturesque setting the TRNC Government decided to lease the properties to members of the expatriate community, mostly British and Germans who wanted to have a slice of Cyprus and were prepared to pay for the privilege of restoring the cottages to a condition far in excess of their original state. Thus, Karaman has become an example of what can be done to renovate and beautify an entire and typically Cypriot village.

It is often referred to as the “English Village” probably because the shop/post office and the village pub are run along English lines and also because so many of the houses have typically British sounding names, for example; Cobblers, Dingley Dell, Dun Roamin’ and the pub that is called “The Crow’s Nest” serving straightforward, no nonsense British style food.

Though extremely attractive to look at, and to walk around in springtime, when garden flowers are emerging and there is an abundance of colour, the village suffers with the cold and damp in winter as the sun barely comes above the mountains and in summer it is unbearably hot when the stones upon which is built act like a night storage heater absorbing the heat during the day and releasing it long into the night.

The church is the central point and is easy to find, the attractive central square adds to the overall appeal of the village and the church is open every Sunday between the hours of 1000 to 1230 to permit viewing of its collection of 19th Century icons. 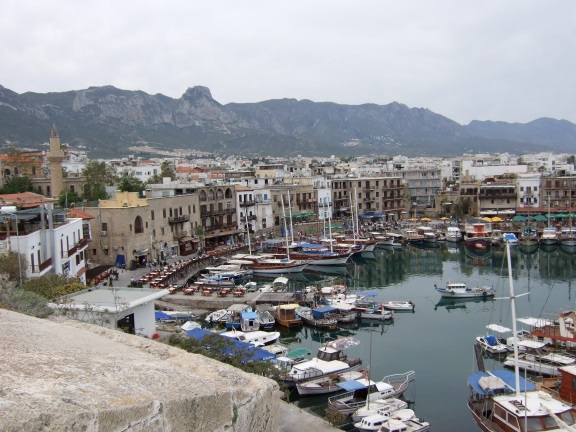 Old Kyrenia and the Venetian Harbour