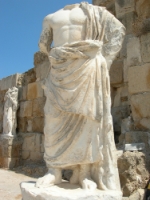 There is tarmac road leading from the rear of the theatre that forks left and right. Take the left fork and follow the road passing a villa with visible bath and furnace area on the left, until a crossroads is reached close to the late city walls. Carry straight on and there are the remains of another small villa on the left and the circular reservoir of a public fountain. On the right are some vast granite pillars from some long forgotten forum and a few yards further on the left the large basilica area of St. Epiphanios is visible. This is the largest purpose built Christian basilica on the island and was erected during the time of Epiphanios Bishop of Constantia in the 4th Century. By this time after devastating earthquakes, the city had been renamed Constantia in honour of the Emperor Constantius II.

There is little to see of the original building apart from some broken pieces of column, but the size of the central nave and adjoining aisles measuring 190 by 130 ft (58 by 41m) gives some indication of the importance attributed to the original edifice. In the south apse there are some sections of mosaic flooring and clear indications of an under floor heating system to ensure warm water for the baptismal rite.