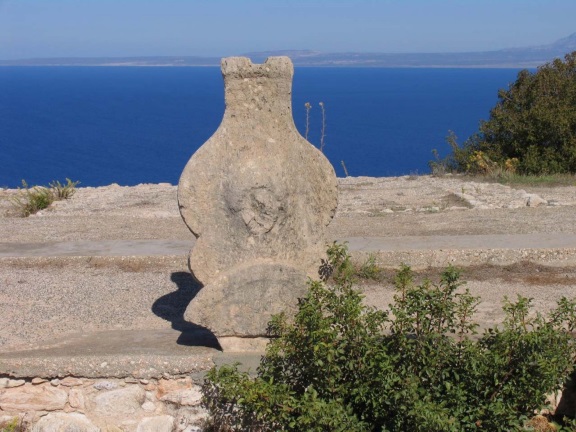 The oriental style cliff-top palace of Vouni was built during Persian dominance by a pro-Persian king of Marion. The strategic position enabled the inhabitants to look down on the city of Soli and had advance warning if the Greek warriors from that city planned an attack. There were constant scuffles between Greek and Persian forces and when the Greeks got the upper hand they took over Vouni and made substantial changes. They erected a Temple to Athene on the south side of the hill, and altered the entrance, making it more impressive with access to the building up a broad flight of steps and into the main courtyard. 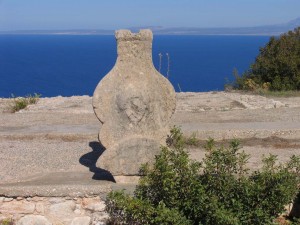 The original construction took place circa 500 BC and was inhabited for about 100 years. The Persians managed to reclaim the site after the Palace was destroyed by fire in 400 BC, but abandoned it soon after. From then on, nature took control and covered the foundations with shrubby bushes, wild olive and lentiscus. It became a grazing pasture for sheep and goats, and it was not until the Swedish expedition came to Cyprus and began their excavations that the full extent of this amazing palace came to light.

All artefacts discovered on this site during the expedition, including votive offerings from the Temple of Athene and a hoard of silver, are on display in the Nicosia museum, in south Cyprus.

There is a wealth of fascinating history to explore. There are deep cisterns into which rainwater was collected via a complicated grid of drains and pipes, and examples of early water closets; there is a sauna bath, built long before the Romans constructed the hot baths at Salamis.

Architecturally this was a building that would not look out of place in the modern world. There is a central courtyard that would have been surrounded by receiving rooms with a covered portico. There are chambers where amphorae used for preserving oil, wine, salt, vinegar and honey were kept. There are vast storerooms for grain which would ensure that the populace that lived in the palace could survive through a siege.

In the central courtyard there is a deep cistern with a carved stele to one side of it. This large stone with a groove cut into the top, is thought to have been one of a pair that were used to support the windlass that was used to draw the water up by bucket. There is a crudely carved face on one side of it that may possibly have been intended as a representation of the Goddess Athene. It was found halfway down the cliff, and it is presumed the counterpart suffered the same fate and either broke in the fall or may still be lying submerged in the sea below.

For much of the year, this site slumbers under an azure sky. Springtime on a clear day is particularly beautiful as the air is filled with bird-song and wild flowers tremble in the breeze. The view across Guzelyurt bay and westwards towards the small island of Petra tou Limniti, where artefacts from Stone Age man were discovered, is quite breathtaking. The winter wind can chill and visitors are few during the inclement months but there is never a bad time to come to Vouni as with each of the seasons it offers unparalleled views over the surrounding countryside and south to the Troodos Mountains.