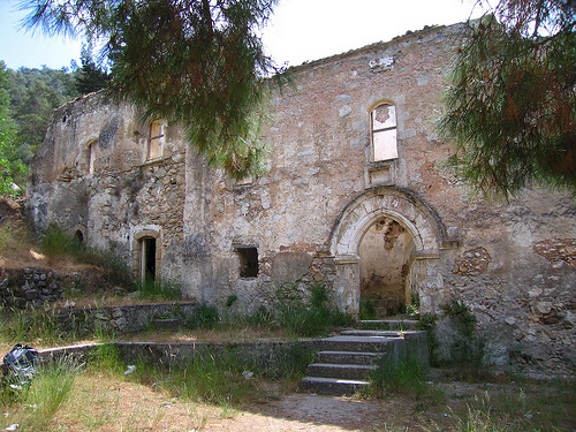 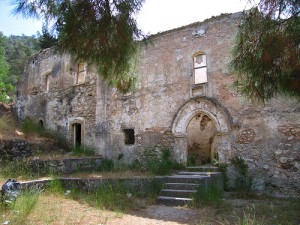 Access to this ruined monastery is from the same mountain road that leads from The Five Finger Mountain to Alevkaya. After driving for about 4 miles (6.5km) slow down and keep looking down into the valley below. The monastery buildings will be seen nestling among the pine trees. Continue along the road until a large picnic site is reached and turn left. There is a barrier that is sometimes closed but when open the track down to the monastery is safe to drive. However, even if the barrier is closed it is an easy walk to the site though not particularly recommended in the heat of summer.

Originally the ecclesiastical complex belonged to a small Coptic community and the church was dedicated to St. Magar. In the 15th C it passed to the Armenians of Cyprus and was a resting place for pilgrims on their way to the Holy Land.

After 1974 the buildings were used by an orphanage in Nicosia and many children spent long happy summers among the trees before returning to school in the autumn.

Over the intervening years the monastery has fallen into a state of almost irreparable ruin. Despite various attempts to restore the buildings for secular use, permission from the Armenian Church authorities has not been given and the dereliction continues.