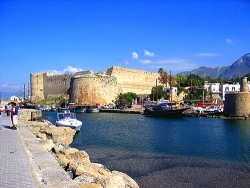 The history of Kyrenia castle, shares its origin with the mountain castles and was built by the Byzantines for the same defensive reasons, to repel the Arab raiders of the 7th C. It is possible that there may have been a Roman fort to protect the trading route that brought vessels to the northern shore and the Byzantines constructed their first citadel on top of it. The defensive walls of today were built by the Venetians and behind them is a complicated network of towers and tunnels created by the builders over the previous centuries.

From the ticket office a bridge leads to the arched main entrance that was once protected by a portcullis, there is a steep ramp that ascends through a tunnel, and as the tunnel ends, a flight of steps leads down to the right. These steps went down to the sea gate. They are steep, unlit and access is unsafe.

To the left a short flight of steps leads into the narrow tunnel entrance to the chapel of St. George. This small Byzantine church started its existence well outside the castle walls. During Lusignan times it was only just beyond the perimeter and when the Venetians extended the defences, it became very definitely within the castle confines. The church is cruciform in design, with a dome supported by four Corinthian columns made of white marble, undoubtedly recycled from some ancient city, and the floor has a few remnants of opus sectile paving.

It is necessary to return to the main entrance slope in order to get into the other parts of the castle. At the top of the slope on the right are store rooms containing some ancient terracotta sarcophagi and an exhibition hall with a display of pictures that shows how the castle has expanded and changed during the different periods of rule.

Before entering the castle, the slope continues upwards to the top of the ramparts, passing on the way the visible dome of the church, to the roof of the circular Venetian tower. It is from this tower that there is the very best view of Kyrenia harbour with a photographic opportunity not to be missed.

The 14th C gatehouse that was the main entrance during the Lusignan period has the royal coat of arms above the gate and there is evidence of the apparatus that operated the portcullis.

Just inside the gateway is the tomb of one Sadik Pasha, an Ottoman commander who lost his life during the Ottoman conquest.

On entering the large central courtyard there are signs that point the way to the many and varied attractions of the castle. To the right are the dungeons and “oubliettes”. The Antiquities department have enterprisingly created some rather gruesome tableaux and there are effigies of the two most famous people to be incarcerated in the oubliettes. John Visconti, loyal friend of King Peter I, and Jeanne, king Peter’s mistress. Both these unfortunates were confined here through the machinations of the evil Queen Eleanor.

There are steps up to the rooms that once served as the royal apartments with broad balconies overlooking the courtyard.

Crenellations in the north wall overlook the sea, with embrasures and arrow slits for the archers. It is possible to walk much of the ramparts and there are fine views in every direction. Care should be taken at all times.

The north-east tower was built by the Lusignans, unchanged by the Venetians it thus remains in its original state. There are exhibitions in the two main rooms of this tower. In one there are reasonably life-like effigies of soldiers throughout the ages and the other is of the many differing types of weaponry that have been used by the castle inhabitants to protect their stronghold.

The east wing contains tableaux of Neolithic man and his environs, most notably the village of Vrysi that is about 6 miles to the east of Kyrenia. Also there are  re-constructions of tombs and burial customs, with artefacts that have been found locally.

Access is possible into the lower levels of some of the Venetian towers and they are definitely worth exploring. The steps are steep and sometimes not very well lit, so care should be taken.