Church of SS Peter and Paul

Church of the Franciscans

Church of St. George of the Greeks

Church of SS Peter and Paul 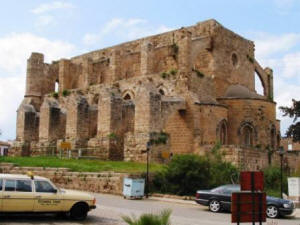 This church, lies to the south of the palace and though closed to the public is in good repair. It was used at one time as a mosque, the remains of the minaret can still be seen tumbled to the ground on the south west corner, it has also been a public library, and used as a granary. In fact it has the alternative name, The Wheat Mosque for this very reason. It is on the whole an ugly structure with huge and clumsy flying buttresses that were built to support the nave. Nevertheless it is imposing, as it was intended to be, because it is said to have been built with the proceeds of a single trading expedition!