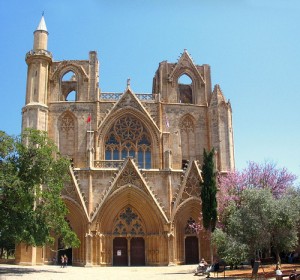 The name Sophia means “divine wisdom” and this great Gothic building erected during the Lusignan period was to be the most important church on the island. The foundation stone was laid in 1209 under the ecumenical rule of Archbishop Thierry, most probably on the site of an earlier Byzantine structure.  During a visit to Cyprus in 1248, King Louis IX of France supplied funds, engineers and artisans to continue the building work but there was a constant lack of money to complete the task. In fact the church was never completed and in an unfinished state it was consecrated in 1326.

There was damage to the fabric during the attempted takeover of the island by the Genoese in the 14th C and by the Mameluke siege in the 15th C. Repairs were carried out to prevent a complete collapse of the building as it suffered further during earthquakes in 1491 and 1547 when massive buttresses were added to support the walls. A close look at the masonry today will reveal modern strain gauges to measure the shift during the 21st C.

It was in this Cathedral that the Lusignan monarchs were crowned as Kings of Cyprus, before they had a second coronation, in the Cathedral of St. Nicholas in Famagusta, as Kings of Jerusalem. The last Catholic mass to be held in this church was on September 9th 1570 and was given by Francesco Contarini, the Bishop of Paphos. The Ottoman conquerors swiftly removed all traces of popery, smashing the stained glass windows and statues, and once all offending reminders of Christianity had been erased, the church was turned into a mosque with the necessary additions, including a minaret from which the Muezzin gives the call to prayer, and the Mihrab, which is the brightly painted niche in the wall that is called the gateway to Mecca and shows the direction in which to kneel during prayer. There is also the Mimbar, the high pulpit, and there is the screen behind which women of the congregation are segregated during prayer times. The Selimiye mosque also has two minarets, an unusual feature in Cyprus on a Christian church which has been converted to the Muslim faith.

There are several chapels within the church and they are sometimes open to the public. The chapel in the north transept was dedicated to St. Nicholas; in the south transept the chapel was dedicated to the Blessed Virgin Mary. There is also the chapel of St. Thomas Aquinas that contains some of the preserved tombstones dating from the Middle Ages.

The church/mosque retained its original name until 1954 when it was renamed Selimiye after the Sultan Selim II during whose reign the Ottomans conquered Cyprus.

As with all places of worship please respect the customs and culture of the people, dress decently, and if entering a mosque remove your shoes before doing so.