The Great Inn (The Buyuk Han)

The Great Inn (The Buyuk Han) 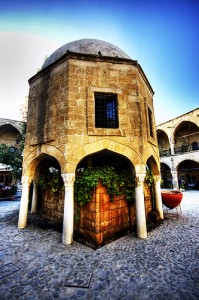 This Great Inn is the most important Ottoman structure on the whole of the island. Construction began in 1572 under the guidance of Mustafa Pasha who was the first Ottoman governor of Cyprus and it was quickly established as the major trading point. These Inns or Caravanserais were used by merchants from the Orient, Arabia, Anatolia and Europe to store and trade their goods. In the centre there is a small mosque with ablution facility beneath it and there are two entrances. The doorways are high enough and wide enough to allow a fully laden camel to enter. Once inside the merchant would unload his camels and display his merchandise in the room on the lower floor, taking the upper room as his accommodation during his period of trade. The camels would have been stabled outside the Inn. At night the large entrance doors to the caravanserais would be closed and secured and the only access would be through a small doorway just large enough for a person to get through. This small door is called the “eye of the needle”, and reference is made to it in the Holy Bible. St. Matthew, chapter 19 verse 24, “Again I tell you, it is easier for a camel to go through the eye of a needle than for a rich man to enter the kingdom of God!”

The Buyuk Han has been fully restored and is now a busy and thriving outlet for local arts and crafts. There are painters and lace makers, wine producers and small cafes. It is a wonderful place to relax and search for souvenirs, and when it is bustling with activity it is not difficult to imagine what it would have looked like when it was the great central trading post of Cyprus.

Close by is the much smaller, Kumarciler Han or Gambler’s Inn. This is closed and undergoing restoration.