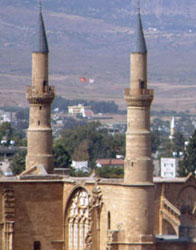 The capital city of Cyprus is Nicosia, Lefkosa in Turkish, Lefkosia in Greek. It is the only divided capital city in the world and is the administrative centre for both the recognised Republic of South Cyprus and the Turkish Republic of North Cyprus.

The inland position, midway between the mountain ranges has made this a meeting point from all parts of the island. Originally called Ledra and a small city kingdom circa 1050BC the town came to prominence after the Arab raids of the 7th century AD devastated the coastal towns and villages.

The name Lefkosia probably derived from Lefkos, the son of Ptolemy Soter the Pharaoh of Egypt, when the island came under Egyptian vassalage. It was not until Lusignan rule in the late 12th C AD that the name of the city became Nicosia. Quite why this change took place no definite reason can be given unless it was an inability, or refusal by the new rulers to pronounce the ancient name and it became corrupted to Nicosia. Thus it has remained to the present day and is freely interchanged with the Turkish and Greek names, and it doesn’t matter a bit which of the names is used.

Under Lusignan rule the city developed culturally and commercially, expanding as the need arose. Many mansions, palaces, churches and other ecclesiastical buildings were built up to the late 15th C, until the Venetian takeover of 1478. Realisation that the spread of the Ottoman Empire would inevitably take in the strategic island of Cyprus prompted the Venetian rulers to take such action as they considered necessary to thwart any siege. The cities were all reduced in circumference and reinforced with massive walls. The destruction of many beautiful Lusignan buildings, including the monastery of San Domenico in whose church the Lusignan kings were buried, was the price Nicosia paid in order to achieve the remodelling of the city into a siege-proof Venetian stronghold. The city was reduced to half its original size with a circumference of three miles, it was enclosed within a circular earthwork of eleven bastions a large dry ditch and three main access gates. The military architect who oversaw the fortifications was the Venetian Julius Savorgnano and by 1567 the massive walls that we see today had been completed. Total reinforcement was not finalised when the Ottoman forces arrived with a great army in 1570 and attacked the city.

The siege of Nicosia lasted six weeks at the end of which time 20,000 inhabitants had died and the city had been laid waste. The great catholic cathedral was sacked and all its sacred relics and statues smashed. The tombs within the church were ripped apart and the bones of the occupants were thrown out into the streets to be trampled by the conquering forces. Once the blood lust of war had passed the cathedral was swiftly turned into a mosque and it is still the most important mosque in North Cyprus.

Under Ottoman rule Nicosia continued to be the capital city and underwent more disasters both man-made and natural. There was an attempt to throw off the yoke of Ottoman rule in the early 19th C which was swiftly put down by the Turkish forces.  In 1835 an outbreak of cholera killed a large proportion of the city population and in 1857 a fire seriously damaged many of the fine remaining buildings. In 1878 the British Government was granted a lease on the island by the Sultan of Turkey, it was a politically expedient exercise giving the British Government a foothold in the Eastern Mediterranean from where they could keep track on what was going through the recently opened Suez Canal.

The 1950’s brought another period of violence with the call for Enosis, and indiscriminate killing of British service personnel and Turkish Cypriots by the Greek Cypriot EOKA rebels. The British refused to hand the island over to Greece but did eventually accede to the request for independence which was granted in 1960.

The events of 1964 saw the barrier erected across the city centre as a prelude to the ultimate division of the whole island in two parts in 1974. In April 2008 the barrier in central Nicosia was taken down and the Ledra Street/Lokmaci crossing opened to permit the free crossing of all Cypriots into both parts of their capital city. A significant move in the process towards a long lasting reunification and peace, had been achieved.