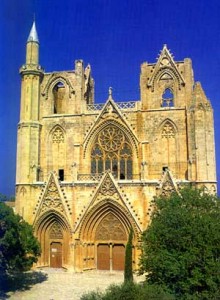 The most impressive edifice in Famagusta, if not the whole of Cyprus, is the beautiful gothic Catholic Cathedral built during the Lusignan period and dedicated to St. Nicholas. Constructed in the 14th C it is styled very much on the same lines as Rheims Cathedral in northern France. It was here that the Lusignan kings were crowned as Kings of Jerusalem, an honour in name only as the Kingdom of Jerusalem, was lost to Saladin in 1187, and never regained. It was also in this cathedral that the last of the Lusignan monarchs, and widow of James II, Queen Catherine Cornaro, abdicated the throne and handed the island over to Agostino Barberigo, the Doge of Venice in 1489.

The interior of the cathedral has a pleasing simplicity about it. The walls have been cleaned and the stonework remains bare. The entire floor is carpeted with the exception of one small section in the northern apse where can be found the tombstone covering the last resting place of Bishop Etier of Nabinaux, who is said to have died of a chill caught after bathing in the sea in 1365. All other mortal remains buried beneath the concealed flagstones were thrown out after the Ottoman conquest in 1571. Just why Bishop Itier was spared such gruesome dispersal of his bones, history does not relate.

There is no admission fee though a donation is requested.