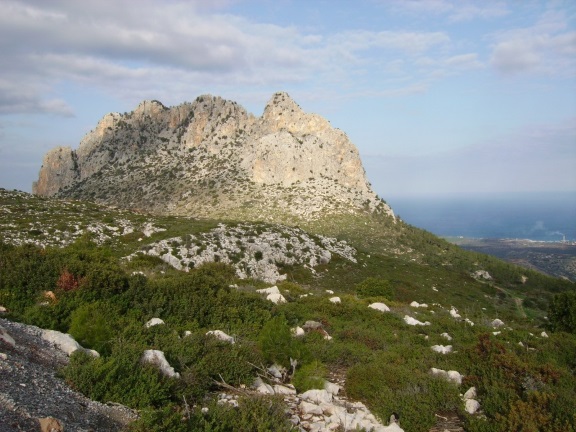 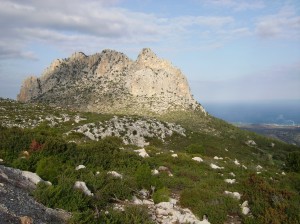 Called Pentadactylos in Greek. Beshparmak in Turkish, and Five Fingers in English. These are the three names by which the mountain range, that runs parallel to the north coast, are known, and there is one particular part of the range that is truly the “Five Finger” mountain. According to one legend, the gnarled massif was formed during a time millions of years ago when the world was peopled by giants. One giant was chasing another and picked up a handful of stones which he threw at his opponent. The stones missed their target and landed on the hillside forming the limestone “five finger” ridge. Look closely and you will see that it does indeed look a little like a clenched fist!

This mountain range is some 175 km in length and is made of rocks that come under the general heading of limestone. These include dolomite and marble and are dated to the Mesozoic period. This era of development in the earth’s crust covered the Triassic, Jurassic and Cretaceous periods, (which is as far back as 200 million years ago), during which there was tremendous tectonic, climatic and evolutionary change. The Cyprus shoreline is littered with thousands of fossils, mostly of sea living creatures but also, and less well known, there are the fossils of pygmy hippopotami that once roamed this land.

There are three main passes in the mountain range through which most traffic is routed, though there are other tracks that take a more circuitous route and are used by foresters, keen walkers, sheep and goats. Above Kyrenia is the pass near the turning for St. Hilarion, this is the most central of the passes. To the west is the Gecitkoy/Camlibel pass, and the one to the east is from Gecitkale.

This mountain range has a relatively low altitude of just over 1,000 metres but it provides an effective barrier between the Mesaoria Plain and the northern coastline. Thus it prevents the harshest winter winds from drying the fertile soil that fills the agricultural area between the Troodos Mountains in the south and the Kyrenia Range in the north. The winter rain irrigates the plain and provides nourishment for the crops, and the porous limestone provides an excellent filter for the water that is preserved in the mountain aquifers. It is this mountain range that provides the water for nearly all the towns and villages in North Cyprus.

There is a strongly marked contrast in the vegetation cover, with the northern slopes clothed in pine and cypress forests, including a selection of deciduous trees. Arbutus, Holm Oak, Azerolus, Fig and Walnut are well spread and frequent. The southern slopes are sparsely dressed, bearing only scrubby pine and stunted wild olive, intermingling with patches of thorn, myrtle and giant fennel.

Due to the upward thrust in the shift of the tectonic plates, the hard masses of limestone have formed the peaks on which the mountain castles are built, resulting in varied and stunningly beautiful scenery. In addition, the Kyrenia Mountain range is an area of diverse flora, many of them endemic species and a source of delight to all botanists whether amateur of professional.