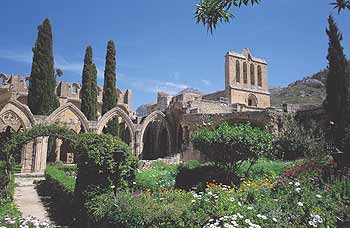 The Abbey of Bellapais has drawn visitors to the island of Cyprus since medieval times when the abbey was built. From the pilgrims who trod the ancient paths in search of a miracle through to the holiday makers of today, the abbey has never been short of visitors.

Founded in the early 13thC by the Augustinian friars, evicted from the city of Jerusalem, after it fell to Saladin, the first church was established under Aimery Lusignan (ruled 1194-1205). The ecclesiastical building we see now has undergone many changes and been called by different names. It has been “Our blessed Lady Mary of the Mountains”, “L’Abbaye Blanche”, (The White Abbey, so named after the White Canons from the order of St. Norbert), “Abbaye de la Paix” from which came the Venetian corruption of “Bellapaise” that has changed little in the 21stC.

The Abbey Church is dedicated to Ayia Asprophorusa, “Our Lady of the White Garments”.

Endowed with a piece of the True Cross, a gift from a French crusading knight, and with abundant monetary donations from a succession of grateful pilgrims, the abbey grew in richness and pride. It became a venue for the pious, and the wealthy, and was much favoured by the ruling Lusignan royal family.

Over a period of time the monastic order became dissolute and the inevitable decline was hastened by the Genoese invasion of the island in the 14thC. After plundering Kyrenia, the invaders sacked the abbey and in an act of sacrilegious vandalism they stole the holy relic and all the abbey treasures.

A further decline of the abbey buildings took place when stone was removed to build some of the houses which make up the village dwellings today. Eventually after much debate the abbey was placed in the care of the Cyprus Antiquities department and we see it now a celebrated ruin that is a splendid example of Renaissance Gothic architecture in the heart of the Levant.

A walk around the abbey buildings should never be hurried and there are plenty of shady places for quiet contemplation. The church is no longer used for Orthodox Christian services but it remains open as an integral and important part of the abbey complex. There are some icons of little merit, in the iconostasis that was added when the church was changed from Catholic to Orthodox use, and the women’s gallery high above the main entrance is also an Orthodox addition.

Barely visible in the narthex before entering the church are remains of frescoes dating from the late 14th, early 15th C, they are now scant fragments of once impressive paintings depicting scenes from the life of Christ.

The cloisters still retain an air of sanctity and it is not hard to imagine discalced monks, their heads bowed in prayer, padding softly within its confines. The night stair that was used by the monks to access the church for night time devotions can now be used to climb onto the cloister roof. From the eastern section of the cloister, doorways lead into the chapter house and the work room. The Abbot would use the chapter house as his office and would issue his daily orders, the workroom would be used by the monks employed in such delicate tasks as illuminating manuscripts and it is likely these were the only two rooms available to the monks with heating. In both these rooms the stone masons have left their trademarks, and humorous carvings in the corbels that support the ribs for the roof.

The refectory, or great hall, on the northern side of the cloister is an impressively proportioned room with a wall pulpit where a monk would stand to read from the scriptures during mealtimes.

It is regrettable that a certain amount of damage was done to the walls during British rule. The refectory was used as a store room as can be seen from the rough cut joist holes in the walls and also as a rifle range! The eastern wall beneath the rose window is pitted with bullet holes and rather spoils the beautiful description of W.H. Mallock writing in 1889, “Nowhere a stone was chipped, nowhere an angle obliterated. Not York Minster nor Westminster Abbey could show in all their roofs, groining whose ribs rose and met more gracefully, or more complete preservation of the overarching stone”.

At the entrance to the hall are two sarcophagi that were used by the monks as a lavabo before entering to take their meals. Above the doorway on the marble lintel are the coats of arms of the Kings of Cyprus, Jerusalem, and the quartering of Jerusalem and Cyprus united.

Below the great hall is the massive under-croft where the victuals of the abbey were stored. This lower chamber is supporting the full weight of the great hall above it. It is indeed an impressive structure.

What better way to end a visit than to sit beneath the mulberry tree and join with all those who choose to be idle for a while?