Activities in North Cyprus are dependent on the time of year and the associated temperatures. The two main seasons attracting visitors are spring for the abundance of wild flowers when the country is at its most enchanting and summer when the sea is as warm as bath water and the desire for sunshine and a rich tan are the main objectives for most of the country’s tourists.

As October approaches the usual summer activities are still in full swing. The sea will continue to be warm until the first big storm that stirs and cools the Mediterranean waters. Para gliding and scuba diving will be available until the skies become too cloudy and the seas are too rough, unfortunately there is no way of predicting exactly when that will be. Boat trips will ply their course along the north coast for as long as the harbour master says it is safe to do so, and therefore North Cyprus is not short of things to do as the summer comes to an end.

However during the autumn and winter seasons there are still many things to encourage people to visit this beautiful land. Autumn is the season of many festivals. There are music festivals that range through every field of the art, from classical recitals at Bellapais to rhythm and blues in the Girne amfiteatro (Kyrenia open air theatre) and there are the festivals that celebrate the rich agricultural produce of Cyprus, most notably the carob and the olive. Many villages and towns will have open days and craft markets where the processing of the carob and olive crops are displayed to the public. 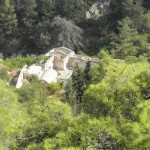 Ruins of the Monastery of Sourp Magar (Armenian)

The carob pod is still a main constituent in cattle feed but it is also used widely across the island in the form of “pekmez” a thick brown syrup that is very similar in taste and texture to molasses and is used in a variety of culinary ways. Many a breakfast dish of yoghurt is enhanced by a small topping of “pekmez” and a spoonful a day is reputed to keep the doctor away. It is also added to soups and stews to give a richness of colour and a hint of something indefinable but quite delicious.

Every housewife knows of the pure unsaturated fat goodness of olive oil and one of the delights of an autumn visit to Cyprus is to see the olives being reduced from their natural state, straight off the tree, into the thick emerald green oil that is used in all Cypriot cooking and is now an essential ingredient in every kitchen cupboard. The five main stages in olive oil production are: picking, crushing, squeezing, separating and bottling. It all sounds very simple but in fact is fairly labour intensive. The picking of the olives is an activity in which the whole family takes part (and those visitors who want to get involved), and is set about with great enthusiasm. Nets and polythene sheets are spread on the ground beneath the tree and long poles are used to beat the olives to the ground. From tiny children to elderly matriarchs, the fallen fruit is gathered by nimble fingers into bags from transportation to the olive oil factory. The olives are then placed into a vast mill for crushing into a pulp that is in turn inserted into bags made usually of coconut fibre. These bags are then laid one upon the other underneath a press that gradually squeezes the oil out of the bags with as little residual solids of olive as possible. The pressed oil is then passed through a high speed centrifuge that separates the oil from the water content and the oil is ready for bottling. This oil now needs to settle and once the sludge has sunk to the bottom of the bottle the oil can be decanted into a fresh receptacle and is ready for use.

There are many mills in operation across North Cyprus, not as many as in the days when each village had its own mill, but still enough for everyone who wants to see this ancient traditional craft in operation. For visitors who are interested in Eco Tourism, there are specialist olive picking vacations where participants are fully active through every stage of the oil manufacturing process, and there is the certainty that at the end of their time here they will (a) know all there is to know about olive oil and (b) go home with a bottle of their very own pressing. 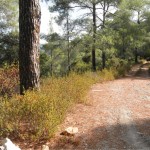 Walking along the forest track

Another popular autumn pursuit is mountain walking/hiking. Unlike walking in spring when the weather may carry the risk of rain, the end of summer brings the cooler weather but still warm sunny days. The oppressive humidity has passed leaving the daytime temperature ideal for exploring the hillsides with little chance of a storm. There are many trails signposted throughout the Kyrenia Mountain range and maps are available from the Tourist Information Office. Situated along the main route of the ridge road from the Buffavento Besparmak (Five Fingers) turning there is a sign which points towards the east that states “Kyrenia Mountains Visitor Centre 9km.” However, the sign is misleading as the only centre 9km down the road is the North Cyprus Herbarium, but maybe with the help of EU donated money the visitor centre could be operational in 2012. There are helpful trail maps at intervals along this tarmacked track with useful information on the habitat, flora and fauna and of utmost importance, safety.

The road that leads westwards from the Buffavento/Besparmak crossroads has few walking trails leading from it and care should be exercised as there are inaccessible areas that are under army occupation. This is a good route for bird-watching with rollers and bee-eaters perching on the electricity wires and birds of prey circling in the thermals overhead. The surrounding landscape is not as densely forested as the route eastwards making this an excellent area with more open visibility for “twitchers” to explore.

The castle of Buffavento is poised high on the mountain top at a height of 3,000 Ft with a good stepped path to the summit. Continuing westwards the ruined monastic building of Panayia Absinthiotissa will be found adjacent to a large picnic site before reaching the village of Tashkent. There is a further track that leads up and over the ridge and descends the north face of the mountains to Bellapais.

Most of the terrain on this mountain range is rugged and boulder strewn and walking should be confined to the well-defined paths. These tend to be gravel or compacted earth and most are signposted with their destination. However there are some tracks that are only foresters’ paths and are there for maintenance of the surrounding woodland, thus they can sometimes be dead ends. 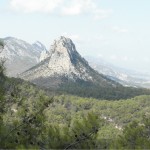 Five finger mountain from the east

There are few flowers to be seen at the onset of autumn though the most obvious one the Sea Squill (Urginea maritima) can be seen everywhere. Once there has been some rain and the weather cools there will be the first signs of the autumn or Cyprus Cyclamen  (Cyclamen cyprium), a Cyprus endemic, that will continue to flower well into January, and the Cyprus  autumn crocus (Crocus veneris). Around the rocky summits of the castles of St. Hilarion and Buffavento may be seen the St. Hilarion cabbage which is a member of the brassica family and another Cyprus endemic. The autumn squill (Scilla autumnalis) favours the dry rocky hillsides, flowering from September to November, and towards the end of the year after some rain the deep purple flower of the Romulea temskyana will gradually emerge and continue flowering into late spring.

The trees of North Cyprus that cover the mountain sides present an ever changing patchwork of green hues. Predominantly Cypress and Calbrian pine, they are intermingled with Carob, Olive, Arbutus, Styrax, Mimosa, Pistacia terebinthus and lentiscus, the former will often be seen covered with the Pemphigus insect galls. These are in fact a swollen leaf that contains the eggs of the insect. Green to begin with then turning red, these deformed leaves were once used in the leather tanning industry.

The forest floor is covered with low growing shrubs such as the three varieties of Cistus that bloom in spring and there are many different orchids hiding shyly in the undergrowth usually flowering in March and April.

It is always preferable not to walk alone in case of an unexpected fall or twisted ankle. Suitable walking boots are essential and always carry water and a hiking stick.

Enjoy North Cyprus it is a beautiful country with much to offer.