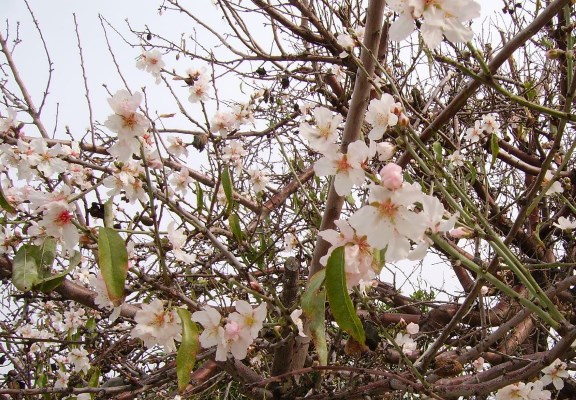 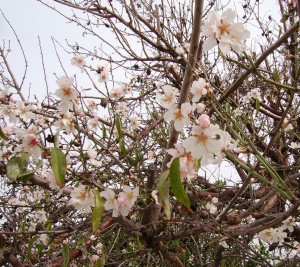 It is self-evident that Spring-time has come very early this year. A wet and warm December gave a false message that the cold weather was over. As January began, so little shoots of green started to appear on the trees and shrubs. Leaves and vestigial fruits burst forth on the mulberry trees, the latter soon removed by the birds, and the leaves have since decided that maybe such an early awakening was not a good idea. By the end of January the almond blossom was very evident, even high in the mountain village of Karaman where there is little sun during the winter months. Rough winds, lashing rain and all round gloomy weather  in early February did not so much as “shake the darling buds of May,” they caused tremendous flooding and widespread damage in the towns and villages. Now midway through the month everything seems to have settled down and it is good to see the reservoirs full for the first time in about five years. 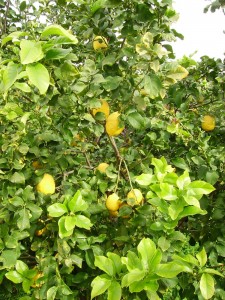 The citrus trees that were starved of moisture are now laden with plump fruit and the blossom for the next fruit harvest. There is nothing like the scent of a freshly picked lemon, nor the taste of that tangy zest added to a Gin and tonic, or squeezed over a sizzling shish kebab.

Migrating birds are visiting the salt marshes, flocks of bright pink Flamingos are to be seen north of Famagusta and in Larnaca, the hedges and bushes are alive with the sound of mating rituals and battles for supremacy, sure signs that Spring is here.

On the Mesaoria Plain and in the olive groves, green crops are now several inches high and the harvest should be assured for the year. Dotted among the verdant corn are the ever present flowers of the oxalis. That perennial pest that is almost impossible to eradicate now covers so much of the landscape it as if Mother Nature has splashed her way across the island with a large pot of bright yellow paint. The Spiny Broom contrasts in a deeper shade of yellow and can be seen along most of the roadsides, intermingled with the pale mauve of the wild sage and the tall, rather elegant Asphodelus aestivus. The star shaped flower, pale cream to pink with a bronze stripe, grows to a height of up to a metre and announces its presence with a strong smell of cat!

The many types of Cyclamen, long dried out and dormant, have benefited from the abundant rainfall and now are growing strong with long stems and large flowers. Most of the ones that grow in the walls get picked for gently fragranced posies. The best display can be seen in the Old British cemetery in Kyrenia, very few people bother to visit this last burial place of some of the British residents who have lived on Cyprus and thus the flowers are undisturbed and present a softly scented, entire carpet of blooms in shades of pink. Among the curiosities in this graveyard is the tomb of Sgt. Sam Mc Gaw VC, of The Black Watch, who died of heat apoplexy while marching to camp on 22nd July 1878. 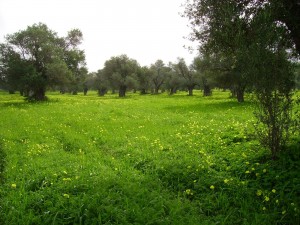 Oxalis in the olive groves

This is the season when Cyprus should be visited for its beauty. There is no better time, it may not be very hot compared with early summer but the visitors we have here at the moment are all walking about in shorts and T-shirts. A far cry from the blizzards and minus zero temperatures of UK!